Nyarai Waterfall, also known as The Green Canyon among the locals 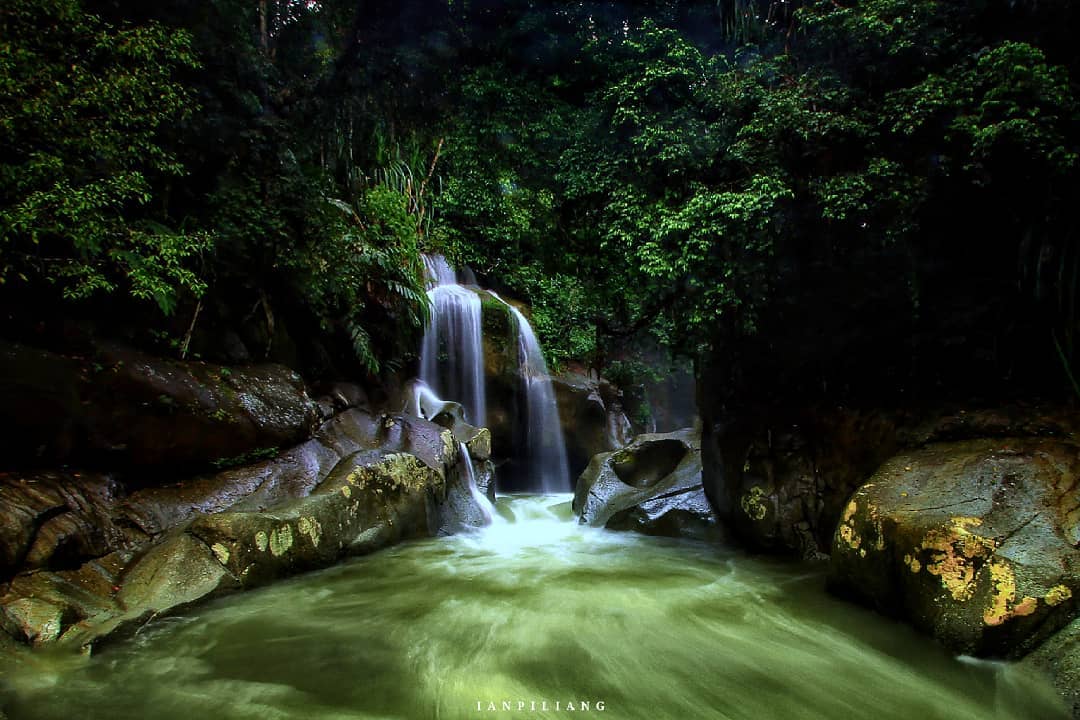 Highlights
The fresh clear water flows among the river stones from Bukit Barisan and falls 7-8 meters down trapped into an approximately 10m wide pool (Lubuk Nyarai) that was naturally formed among giant rocks on each sides. The color could turn really green sometimes as the jungle reflection mixed with the sun light through its clear water.

Jungle Trecking
Walking 3.5km / 2.1 miles through jungle and river view which can be so refreshing. It will accompany us at the beginning of the Jungle Trekking, we might also find some villagers work on their farm, this could be interesting to see as some of them are still stick to a traditional way to cultivate their land. During this trek we will cross through some jungle rivers and natural stone ponds, some of those ponds has several kind of fishes such as “Ikan Panjang” also known as Giant mottled eel and Long finned eel (Anguilla Marmorata) in the family of (Anguillidae) and “Ikan Gariang” also called as Semah/Kancera genus Tor (Neolissochilus) in the family of (Cyprinidae) this genus was once claimed as the only species which can be found in Lake Toba – Parapat while this type is often found in a variety of natural habitat in the other part of Indonesia not only in North Sumatra, and West Sumatra, but West Java, Central Java, Aceh and Borneo as well. This fish can be caught with a handmade traditional gun or a fishing spear . It takes a special skill to catch fish with a spear gun , because you had to dive into the river stream to chase fish

Fish taste amazing as it fresh from the river in this area Gamaran Forest area also known with its thew Flora and Fauna, such as Monyet Merah known as Maroon leaf monkey (Presbytis rubicunda) and Jamur Tudung Pengantin also known as Stinkhorn Mushrooms (Phallaceae) this mushroom can be found here when you do trekking in the rainy season. Before we actually get to Nyarai Waterfall some trails can be hard for some beginners as we have at least two extreme inclines we need to climb and cross a knee-deep rocky Nyarai River (Batang Nyarai) but the whole trip is quite safe for almost all ages if it’s not raining. Don’t worry it required at least twice or more refreshment stops, one in the forest and the other one in the crossing, besides all local guides provided in the area were really well trained to have the standard ability to survive, rescue, and even to train tourists to live in the Jungle. One more thing at, once we arrive everything will be worthed as the energy and the beauty of this spectacular area was so unexpectedly overwhelming.

Camping Ground
Camping is possible as long as you bring your own gears, for some urgent situations “we provided some tents for rent” Ritno said, as well as a guide for group it will all depends on how the group looks like, more guide will be provided when the group contains more women and childrens. When you get to Nyarai Waterfall you’ll need to provide your legal Identification Card or Passport as there are 3 Age categories that will determined the entrance fee, which are :

How To Get There
From Bukittinggi take a minivan to Lubuk Alung 39KM, stop at the Intersection (Simpang) Udikat PLN or Simpang Kasiak Putiah, there you can only take a motorbike (OJEK) cost a maximum Rp. 25.000,- /person. Improve your bargaining skills before you meet them. it will take around 30minutes or 18KM to get to Nyarai Jorong Gamaran Post. There you’ll find Nyarai office and Information center. From Padang to Lubuk Alung 30KM we can also take a minivan, stop at Simpang BLKM from there to Nyarai Jorong Gamaran Post is around 7KM.